I will never be an old man. To me, old age is always 15 years older than I am.

However, they need to be aware of Theodore “Teddy” Roosevelt’s observation:
Old age is like everything else. To make a success of it, you’ve got to start young. 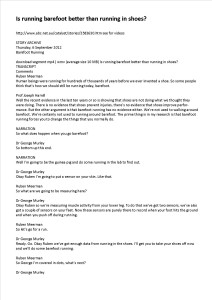 This link is to a transcript to an ABC Catalyst program that deals with the bio-mechanics of running. Useful for upper secondary students.

Is running barefoot better than running in shoes Catalyst

Although students may well be aware of  the biology of joints, they need to be aware of the role of joints in living a healthy life.

Arthritis is a name for a group of conditions affecting the joints and other parts of the body. These conditions cause damage to the joints, usually resulting in pain and stiffness. Arthritis can affect many different parts of the joint and nearly every joint in the body.

Is rheumatism different from arthritis?

The term rheumatism is still used in colloquial speech and historical contexts, but is an out-dated term in medical literature. “Arthritis” is a more accurate term, however, it covers a broad range of conditions.

Are there different types of arthritis?

Anyone can be affected by arthritis, including children and young people. In Australia, nearly one in five people has arthritis. Many people are under the impression that arthritis is just an expected process of getting older. This view is not true. In fact, two out of every three people with arthritis are between 15 and 60 years old. Arthritis can affect people from all backgrounds, ages and lifestyles.

For further information refer to the Students’ section of this website and Arthritis and Osteoporosis WA.